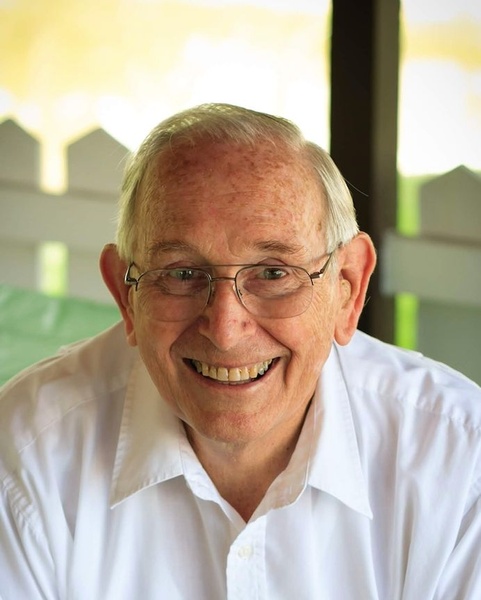 He was born on April 17, 1931 to Thorvald Lauritzen and Georgie Belle Sheard at Fort Sill, Comanche, Oklahoma, where his father was serving in the United States Army. Lou served his country in the United States Navy where he sailed on the maiden voyage of the USS Midway in the Mediterranean. He worked with the first Doppler Radar systems, and his research was pivotal in the US Navy adopting canted decks on all future aircraft carriers.

Lou married his devoted and eternal companion Violate Glenna Myers on July 9, 1954 in the Idaho Falls Temple of The Church of Jesus Christ of Latter-day Saints. They celebrated their 67th anniversary last summer.

Lou worked for Collins Radio Co. for nearly all of his career. He worked as a program manager on projects such as elements of the communications systems that went up in the Apollo space crafts, SR71 Black Bird, and the Egyptian presidential airplane. His work allowed him to visit many places around the world including Europe and the Middle East. He retired in 1985.

Lou served in many different church callings and assignments, including serving in the Dallas Temple of The Church of Jesus Christ of Latter-day Saints.

Lou was known for his sense of humor and love of puzzles and games. He always had various juices and sodas on hand to mix together at meal times.

His children would like to thank his doctors and the entire staff of Brookdale Central Paradise Valley for their care and love over the last several years.

Graveside family services will be held at the National Memorial Cemetery of Arizona in Phoenix on February 16th, 2022 at 1:00 pm.
To order memorial trees in memory of Louis Lauritzen, please visit our tree store.