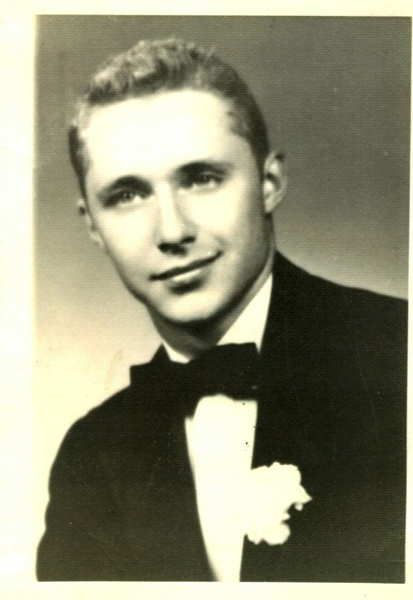 It is with great joy for the long and wonderful life he lived that we announce the passing of Herbert Lain Holt (86) on Saturday, February 13, 2021, at sundown in Carlsbad, California. Still on his feet until just 8 days prior to his passing, Herbert long battled Parkinson's Disease and never once complained. Our hero drew his last breath peacefully at home, surrounded by loved ones. We could not have asked for more for our beloved husband, father, grandfather, uncle, coach and friend.
Herbert was born in 1934 to Otis Eldridge Holt and Martha Louise Holt (nee McDaniel) in Gibson County, Tennessee. A proud son of Trenton, Herbert attended Trenton Elementary and Middle School, and played quarterback and was captain of the football team for Peabody High School. During his high school tenure, Herb won the distinction of being voted football captain of the "Big Ten" on all ten western Tennessee high school coaches' ballots. In basketball, Herb served as captain of the junior varsity and varsity basketball teams. Aside from sports, Herb exhibited leadership as the senior class president. Herb also played baseball for the Humboldt Tennessee American Legion. Because of Herb's outstanding sports performances, he was honored in 2006 to be inducted into the Gibson County Sports Hall of Fame. Known as Ol' Twinkletoes, he was honored in 2020 to be inducted into the Peabody High School Football Hall of Fame.
Herb graduated high school in 1952, and attended Murray State University in Kentucky on a football scholarship where he played quarterback for the Racers and was co-captain of the team. He was the student body vice president and president of the Methodist Student Union. At Murray, Herb met the love of his life, Celia Maurelle Kirksey of Paducah, Kentucky, and they married over the winter break of their senior year in 1955. They recently celebrated 65 years of happily ever after.
After graduating from Murray State in 1957, Herb then earned his Master's Degree in Secondary Education Administration over the summers while he worked as head football coach and head basketball coach for three years in McKenzie, Tennessee. Herb then accepted an offer to teach and coach in Alexandria, Northern Virginia. In Alexandria, Coach Holt drew out the best from students and players and touched the lives and hearts of hundreds of students and their parents for 40 years. Herb taught physical education and English at Francis C. Hammond High School in Alexandria, where he was also the assistant football coach and the junior varsity baseball coach. When T.C. Williams high school opened, he served as head football coach, and the junior varsity baseball coach. After three years, Herb was appointed athletic director, and later became assistant principal. Coach Holt was at T.C. Williams High School fostering goodness during the time of the story "Remember the Titans." Coach Holt also will be remembered for his dedication to students at George Washington Middle School. Upon retirement from T.C. Williams in 1997, he was named "MacDaddy of the Senior Class" by the seniors.
Herb and Maurelle raised their son and daughter in Springfield and West Springfield, Virginia. Herb continued to coach kids' baseball after retirement for the Springfield Babe Ruth League. He proudly served as the Membership Chairman, Vice President and President of the Northern Virginia Athletic Directors, Administrators, and Coaches Association (NVADACA).
A natural at sports, he turned his love of sports toward golf and enjoyed golf outings and trips with his son and friends. Herb never once met a stranger and was known for his get-up-and-go, tenacity and his fun-loving spirit. Genuinely interested in people, Herb never missed an opportunity to help someone or bring out the best in them, whether a family in need, or a kindred spirit hitchhiking a country lane. Herb also saved more than a few lives as a lifeguard on Kentucky Lake in his youth. He loved country music and dancing, and became a square dance caller in the 1970s. He gave his family lots of swim and beach days with bonfires and stories, trips to music festivals and county fairs, football and basketball games, amusement parks, long country drives and especially family and friends. He loved bluegrass, spaghetti Westerns, Burt Reynolds comedies, ice cream, and U.S. historical fiction novels in no particular order. He was cool, calm and collected and supported and loved us dearly, always encouraging our independence and best selves while also being available to catch us should we fall. Herb and Maurelle moved to Carlsbad, California to be with daughter and family and were able to enjoy lots of family celebrations together.
Predeceased by his parents and sister Charlotte Brown (Memphis, TN), Herbert is survived by his wife Celia Maurelle Holt, son John Lain Holt and daughter-in-love Martee Holt of Greensboro, NC, grandchildren Lauren Maurelle Holt (currently Poulsbo, WA, engaged to Darrin Cripe) and Alexander Lain Holt of Charlotte, NC, (engaged to Claire Kane); daughter Kristen Walker, son-in-love Justin D. Walker of Carlsbad, CA, and grandchildren Scarlett, Stella, Katherine and Audrey Walker; nephews Mike Brown (Carla), Pat Brown (Bethany) and Tim Brown; the late John David Kirksey (brother-in-love), sister-in-love Alice Kirksey, niece Diane De La O, nephews Samuel Kirksey (Olga), and Matthew Kirksey, extended family and countless friends. He will be sadly missed by all who knew him and we are sure that over his 40 working years as tireless coach and teacher there will be many other stories to be shared about his kindness, support and generous spirit. Herbert made a difference in many lives and heaven is a better place for calling him home.
A celebration of life will be held when people can safely gather. Please sign the guest book and leave comments at www.accucarecremation.com/obituary. In lieu of flowers, please consider a donation to a scholarship fund in Herb's name for young college-bound athletes at Northern Virginia Athletic Directors, Administrators, and Coaches Association (NVADACA) at www.nvadaca.org or P.O. Box 305, Burke, VA 22009.
The family wishes to thank his amazing caregiver, Sandy S.
To order memorial trees in memory of Herbert Lain Holt, please visit our tree store.