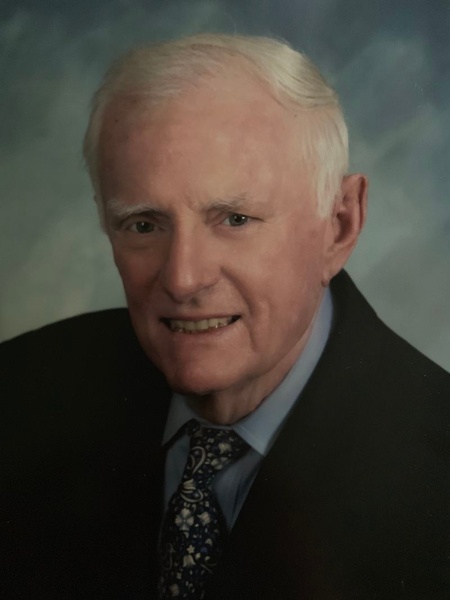 Francis L. McKone, age 85, of Carlsbad, CA and Cotuit, MA passed from this life on September 13, 2019, at Silverado Memory Care in Encinitas, CA, after an extended illness. He was the former President, Chief Executive Officer and Chairman of The Board of Albany International Corp., the world's largest producer of paper machine clothing and high performance industrial products. He joined the company in 1964, retired in 2001 and remained on their Board until 2006.
Frank was born on May 24, 1934 in Lowell, Massachusetts, son of the late Mary and Thomas McKone. He served his country as an officer in the United States Navy after graduating from Lowell Technical Institute, now University of Massachusetts, Lowell, in 1956. After his honorable discharge from the military, he began his career in the Paper Industry. He received his M.S. in Management Engineering from Rensselaer Polytechnic Institute in 1963, and served as a member of their Board of Trustees for many years and was a member of the Stephen Rensselaer Society of Patroons. In 2001 he received their Alumni Key Award, and in 2013 he was a recipient of the Albert Fox Demers Award which recognizes substantial contributions to the welfare of the Institute. Upon his death, he was a Trustee Emeritus. He was actively involved in both universities and received an Honorary Doctor of Humane Letters from the University of Massachusetts, Lowell, in May, 2000 and was also inducted into The Circle of Life Donors of that university. He has endowed scholarships at both U MASS Lowell and Rensselaer Polytechnic Institute. Throughout his life he was passionate that everyone should be able to receive an education.
He served as Director of Albany International Corp., Kadant, Inc., Albank Financial Corp., Thermo-Fibergen and Thermo-Fibertek, and was a founding member of the Engineering Advisory Board of Francis College of Engineering of U MASS Lowell, The Board of Trustees of Assumption College, The Institute of Paper and Science Technology in Atlanta, Georgia, North Carolina State University and the Advisory Board of The College of Saint Rose School of Business. For many years he lectured at the Darden Business School of the University of Virginia and Northeastern University in Boston. He was on the Executive Advisory Board at U Mass Lowell Nanomanufacturing Center.
For several years he was on the Advisory Board of the Paper Industry Management Association, Canadian Pulp and Paper Association and was on the Board of Overseers of Rensselaer Polytechnic Institute Lally School of Management and Technology. In 2001 he received the Joachim Award from Syracuse University for Excellence in Management in the Pulp and Paper Industry. He was a member of The Ridge Club in Sandwich, MA, Aviara Association and La Costa in Carlsbad, CA.
He is survived by his loving wife, Tonita and his daughters Maura McKone, her husband Dr. Joseph Rodgers of East Greenwich, RI, Elizabeth McKone of Austin, TX, and Kathleen McKone-Sweet and her husband Rev. Mark McKone-Sweet of San Diego, CA; stepchildren Susan Neeley and her husband Brian of Carlsbad, CA, James Nagle and his wife Susan of Alamo, CA and Christopher Nagle and his wife Jane of Atlanta, GA; grandchildren Sophie Rodgers, Maya and Marcos McKone-Sweet; step grandchildren Matthew Neeley and his wife Michelle, Sarah Nagle, Kate Nagle, James Nagle, Patrick Nagle, and step great-granddaughter Emmeline Neeley; his cousin Henry McKone and his wife Margo, sister-in-law Alice McKone and several nieces and nephews. He was predeceased by his brother Thomas McKone.
A Roman Catholic Mass in celebration of his life will be held on Saturday 10:00 am October 5, 2019, at The Church of the Nativity in Rancho Santa Fe, CA and a memorial service and burial will be held at a later date in Lowell, Massachusetts.
For those who wish to honor Frank, donations may be made in his name to the following institutions: